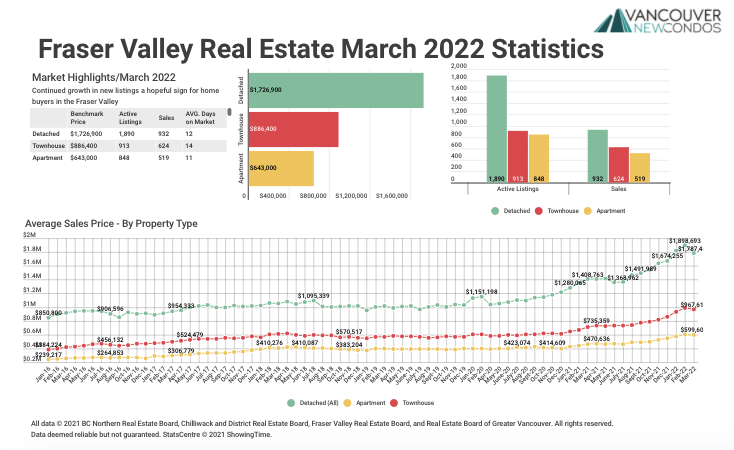 SURREY, BC – For the third consecutive month, new listings in the Fraser Valley continued to climb in March giving buyers more to choose from, helping to increase overall active inventory to levels not seen since last July.

In March, the FVREB processed 2,580 residential and commercial sales on its Multiple Listing Service® (MLS®), a decrease of 22.5 per cent compared to March 2021 and 41.4 per cent more than were processed in February.

Sandra Benz, President of the Board, said of this month’s statistics, “Sales were strong again in March as more new listings continued to come on stream,” said Fraser Valley Real Estate Board President, Sandra Benz. “We’re hopeful this will contribute to a slowing in price growth, which is good news for the home-buying public. Other encouraging signs, such as less open house traffic and fewer multiple offers, may help us get to a more balanced market, however until the fundamental issue of lack of supply is addressed, we won’t see that happen anytime soon.”

Baldev Gill, Chief Executive Officer of the Board, added, “We may not see the impact of recent interest rate hikes on the market trends until later in 2022,” said CEO Baldev Gill. “With fixed rates nearly double what they were a year ago, new homebuyers will likely be more impacted than other segments of the home-buying public, as mortgage stress test conditions become more stringent. We hope to see equal efforts from government to address inventory issues to help make housing more affordable.”

Across Fraser Valley, in March, the average number of days to sell a single-family detached home was 12 and a townhome was 14 days. Apartments took, on average, 11 days to sell.